View source
watch 01:36
We're Getting Mutants in the MCU - The Loop
Do you like this video?
Play Sound
Collectibles is official but unreleased content for Friday the 13th: The Game.

Collectibles were going to be pictures that you could find around the map, it was similar to Pamela Tapes or Tommy Tapes.

Message from Wes Keltner about the "Collectibles":

"Obviously, we can’t put these in the game as they are considered “New Content”. Either way, I wanted to share. Not to rub salt in the wound, but to show some of the art that we wanted to add in.

We had been working on content for the “collectibles” that can be found in game. Some are familiar with the Pamela and Tommy Tapes within Friday the 13th: The Game. We were going to add photos to that system. In these photos (found around in drawers, etc.) the subjects were going to focus on a young Pamela and young Jason. I wasn’t sure about doing this at first. Not about adding to the collectibles, more about the subject and theme of the photos. I was afraid that by showing these that we would be humanizing Jason too much. But the more I discussed this idea and the further into concepts we got with Rachael, the illustrator we were working with, the more I wanted to do it.

The idea here was to shed some light on the life of Pamela and Jason before the events of the first film. Back when Pamela worked at the diner and was then asked by the Christy family to come work at the camp. I was also interested in digging a little deeper into what life was like for a younger, more innocent Jason. Again, this is a delicate subject. So I used as much care as I could. We came up with a series of photos, and below are two of my favorites. The first shows a younger Pamela. 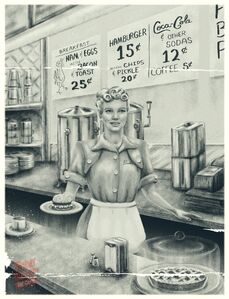 Jason would have only been an infant at this point. Pamela seems happy working at the diner. Perhaps for the first time in her life, that is, if you follow or accept some of the semi-canon out there about the abusive relationship Pamela was in previously. I thought this was important to show her in a stable state. It solidified her as a provider and good mother to Jason. I felt it also showed that her demeanor was pleasant and that folks in town probably liked her. Which brought more power to the character when she lost Jason and with him, her mind. It showed how far she fell when she snapped. All out of love for her son.

The second photo is of a young Jason, perhaps around age 4-5. 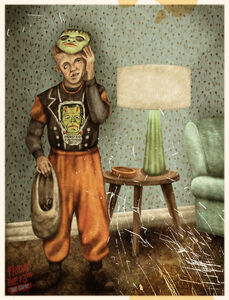 He is excited because it’s Halloween. I had the artist put him in a Frankenstein costume, as a slight nod to Part 6 and Tom McLoughlin, as his approach to that film was very much a “monster movie” from the golden days of cinema. And of course, J6 was reanimated by lightning, much like Frankenstein’s monster. I also had the artist add a cute little nod to “Forest Green” on the shirt. I also researched along with Rachael, the types of costumes that would have been available at the time. I think she did a great job nailing the look.

Lastly, and maybe the most important aspect of this image, was that Halloween was probably Jason’s favorite time of the year. Jason was...mentally simple. Intellectually disabled, but still full of life. A life that was full of ridicule from other kids. He probably never felt like he fit in. But on Halloween, he got to pretend. Even with a disability, he understood that dressing up, putting on a mask, and hiding what he looked like, was empowering. On that night, he just got to be another kid, getting free candy. I thought about that a lot. Perhaps, and this is a stretch, he reached for a mask later in life as a way to cope with the loss of his mother. Perhaps it reminded him of a different time. Maybe that’s too deep, LOL. Either way, it was very interesting to me and I bet some fans out there may find it interesting too."